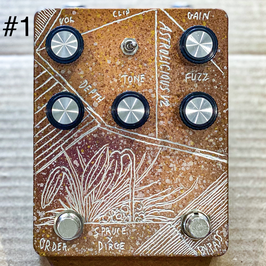 Astrolcious. Myth. Legend. Unknown. Okay, sort of known. The Astrotone was a fuzz box made in the late 60's by Sam Ash. It had a couple of different versions. It's not a very interesting circuit. Has a couple of rando silicon transistors, some clipping diodes, and a pretty cruddy tone control and comparatively weak output. There are some decent clones/upgrades out there, but Spruce and Dirge hooked up to turn it into one of the most versatile distort-o-boxes around. V1 was a huge success, but we spruced things up a bit for V2. There is a spicy Germanium gainstage slamming the front or back end of the main circuit with 7 super-powerful controls. Nothing else like it on Earth...that we know of. Each pedal was hand painted and engraved by Dirge and built/assembled by Spruce Effects. #20 is not for sale but will be up for auction at some point in the future to benefit cancer research.