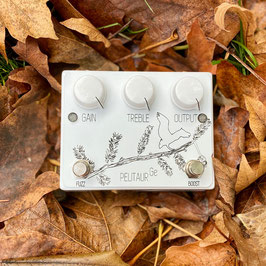 Note: This product is available through Pelican Noiseworks here: https://pelicannoiseworks.com/products/germanium-pelitaur

Pelican NoiseWorks developed the Pelitaur in 2015 to be a gnarly, nasty, unique fuzz with simple, interactive controls. The result was wildly successful, paying satirical homage to a similar looking "taur", but sounding nothing like anything else out there. No clones about it!

Leon from Pelican NoiseWorks and Brian from Spruce Effects became friends around the same time as the Pelitaur came out and Spruce released their first line of effects. A collaboration in the future was almost guaranteed. After sticking a former Spruce Effects favorite, the Growth Ring Germanium boost, in front of a Pelitaur, magical things happened. Brian and Leon started throwing around ideas on how to get new and unique sounds out of the already awesome Pelitaur circuit. After much iteration, Brian added his signature Germanium touch to the Pelitaur circuit and incorporated a full-range Germanium boost to the front end of the Pelitaur. The Germanium sections of the new Pelican and Spruce brainchild feature hard-to-find NOS components.

The fuzz side features a souped-up, gain-juice filled, germanium-ified Pelitaur circuit. The clipping structure has completely changed from the original Pelitaur for a ton of really new and unique sounds on tap. Depending on the gain knob settings, you can get sputtery, gated fuzz all the way to high gain, smooth Germanium clipping.  Overall, it is a little lower gain, yet higher in gnarlyness.

The boost side features light-up hidden controls. The lefthand LED (knob) controls the gain of the boost. The righthand LED (knob) controls the frequency of the boost. Counter-clockwise is treble, clockwise is bass.  Dial it in for a treble or full-range boost. You can add some vintage color to your tone, or slam your amp or Pelitaur circuit with 20dB of boost.

Originally released in 2017, this collaboration has received a well deserved update.  Soft touch relay bypass switching has been added for ease of use and ultimate reliability on stage.  A NOS Telefunken BC108 has been adapted into the left side fuzz of the Pelitaur and tone stack has been modified to accept this change with open arms.  The pure white 1470 series knobs didn't exist until Pelican and Spruce had a manufacturer custom make them. If you find them online for sale, you're welcome. Oh and it’s dressed up in a white suit.

Discount codes do not apply.